The first and only Vice-Presidential bookmarks a hectic week since the First Presidential debate on Tuesday 29th September. The chaotic presidential debate was followed on Friday by President Trump contracting coronavirus and being admitted to hospital. He was still able to use twitter and tweeted on Tuesday night that a new fiscal stimulus bill would not be enacted before the presidential election on 3rd November. Trump continues to slip in the polls and according to the widely respected RealClearPolitics average poll, Biden’s lead has increased from 2.9 percentage points since the first presidential debate.

In contrast to the Presidential debate, the Vice-Presidential debate was marked by both candidates sidestepping questions. Unsurprisingly, Coronavirus was the main focus given rising cases in the country and Donald Trump’s recent diagnosis. Harris went on the attack, saying “They knew what was happening and they didn’t tell you” while looking directly at the camera. Mr Pence countered by saying that the Biden-Harris plan was largely a copy of the Trump administration and assured voters that a vaccine was making speedy progress. Over the course of 90 minutes, both candidates tackled questions on Coronavirus, Climate change, Law and Order and the Supreme Court. The moderator, Susan Page of USA Today finished with a question on whether either have explored the possibility that they would take charge if the president becomes unfit, an issue that has taken special resonance this year as Trump or Biden would set the record for being the oldest president ever if they win.

Both candidates are experienced debaters and although there were sticky moments such as when Pence was accused of interrupting Harris, and both were accused of not answering direct questions, this debate was largely uneventful. Vice-Presidential debates very rarely shake up the presidential race, and Wednesday night seems as if it will follow that trend. The biggest ‘viral’ moment of the night did not involve anything that the candidates said, but a fly who landed on Mike Pence’s head and stayed for about two minutes.
In the aftermath of the debate, the dollar and equites were unchanged. The dollar lost ground to the euro in the immediate aftermath but has since recovered its losses this morning. S&P 500 Futures and Dow Jones futures are both up about 0.2% since the debate, which is very different to the >1% changes in equites seen after the first presidential debate. The dollar will likely turn its attention to domestic policy and US Initial Jobless claims that will be released this afternoon and talks of a potential fiscal stimulus bill.

As election day nears, the polls have recently come into the spotlight. Investors are hoping that a repeat of 2016, where polls were disastrously wrong, does not occur. Currently all major pollsters predict that Biden will win the election, but this may not be enough as Hillary Clinton found in 2016, he will have to win at least 270 electoral votes to claim the Presidency. Biden looks set to win both the popular and electoral college vote, and just as in 2016, the main swing states remain Florida, Ohio and Georgia. Some pollsters believe that Texas, which has voted Red since 1980 could be on the verge of swinging to Biden. 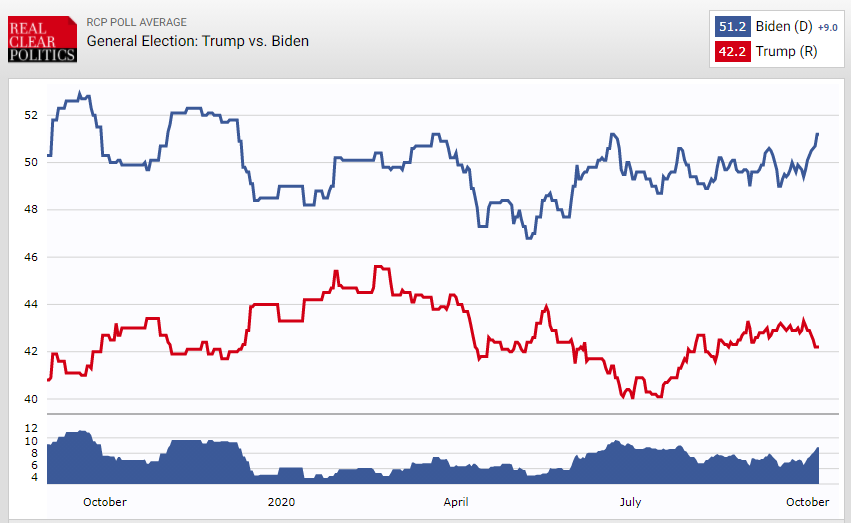 Biden is in the driving seat and will be boosted by Donald Trump’s recent coronavirus infection. Most Americans (65%) think that this could have been avoided if the president took the pandemic more seriously and are turning away from Trump as he is having to take off valuable campaigning time. However, there is still some cause for concern for Democrats. Although the polls are predicting a Biden win, they did the same for Hillary Clinton, who had 5.5-point lead over Trump 27 days before the 2016 election. It is also unclear whether major pollsters have taken adequate steps to make sure that the miscalculation will not happen in 2020. According to a recent poll, 68% of Trump supporters will vote in person, compared to only 39% of Biden supporters. Although the other supporters are likely to vote by mail-in ballots, it is possible that some supporters may miss the deadline as they differ wildly by state.

The Vice-Presidential debate also highlighted that this election is much more than just Trump vs. Biden. The presidential election also coincides with the Senate and House of Representatives elections. In 2018, despite receiving only 39% of the popular vote, Republicans increased their seats by 2 to 53 to take a commanding majority in the senate. As for the House, the Democrats won 41 seats more than in 2016 and won control of the House with 235 seats compared to 199 for the Republicans. In 2020, 35 seats are being contested in the Senate, 23 from the Republican side and 12 from the Democratic side. According to 10 Political news site reports (including RCP, Economist, among others), the consensus is that the Democrats will gain a majority in the senate, with only 1 out of 10 (Daily Kos) predicting that Republicans will gain more seats than the Democrats. This theme is continued for the House of Representatives, where according to 4 Political news sites, the Democrats should win 225 seats (not including seats too close to call) which is above the 218 seats needed for a majority.

The next event in the calendar is the next US Presidential debate on Thursday 15th October. President Trump will hope that he will be fit enough to attend after Biden said this week that he will not take part if the President still has the virus, while his supporters will look for a strong performance and also at 2016, and hope the polls are just as inaccurate.