Only two years after Apple became the first publicly listed U.S. company to hit a $1 trillion stock market value, the iPhone maker has now topped $2 trillion. The Cupertino, California based company’s shares briefly rose as high as $468.65 on Wednesday, equivalent to a market capitalisation of $2.004 trillion.

Asian stocks as well as U.S. and European futures came under pressure overnight after Federal Reserve minutes signalled tempered optimism about growth in the remainder of the year and as Sino-American tensions simmered. Stocks fell in Japan, China and Australia, with Hong Kong and South Korean shares underperforming. A drop in S&P 500 futures signalled Wednesday’s weakness may continue after the Fed noted the health crisis would “weigh heavily” on economic activity and repeated its view that the recovery path depends on virus containment. Gold paired an overnight fall. Treasury yields ticked lower.

Taiwan plans to stop local sales for Chinese internet television streaming services operated by the likes of iQiyi and Tencent Holdings, according to regulations released this week, but does not plan on blocking the services. Democratic Taiwan, claimed by China as its sovereign territory, has long been suspicious of Chinese attempts to sway its population, including by use of fake news spread online and efforts to influence Taiwan media.

Gold will extend its record-setting rally on “massive currency debasement” and expectations for further stimulus, according to SkyBridge Capital, which recently added exposure to the metal after exiting in 2011. 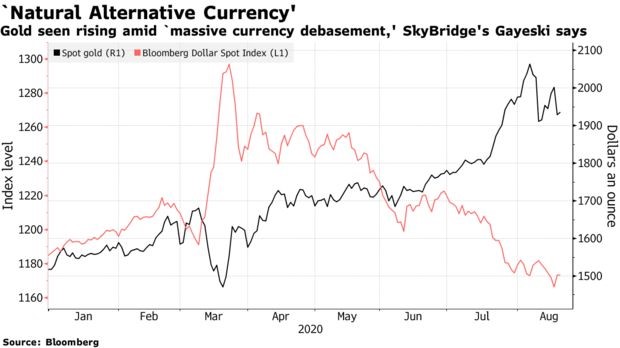 Sterling remained driven by U.S. dollar movements and was sold off overnight influenced by profit taking on short dollar positions. The pound remains in a tight range against the euro whilst Brexit talks continue.

The dollar rallied overnight after minutes from last month’s U.S. Federal Reserve meeting gave few clues about whether an even more dovish shift in its policy framework is possible in the autumn, disappointing some dollar bears. Speculation has been rife the Fed will adopt an average inflation target, and seek to push inflation above 2% to make up for years it has run below, or look to cap government bond yields as part of a broader policy review. The minutes were vague on the matters and merely said “a number” of Fed members thought it would be helpful to make a revised statement on its policy strategy at some point, without providing details or timing.