The Brexit deadline on 15th November is set to be passed without a deal, according to senior officials. Sticking points still remain, especially on fisheries, but the general consensus remains that a deal in some capacity will be agreed before the WTO deadline on 31st December.

The Republican attorney general in Arizona found no evidence of voter fraud, as expected. Donald Trump is still adamant that he won the election, but over the past few days, members of the Republican Party are starting to distance themselves from him.

ECB President Christine Lagarde said that policymakers will focus on emergency bond purchases and long-term loans, in the next wave of stimulus, effectively ruling out negative interest rates. The ECB is predicted to increase its stimulus as the economic outlook of the bloc continues to worsen due to rising Coronavirus cases.

The pound is trading lower against both the euro and dollar in early morning trading today. It is a busy day of economic data, as Q3 GDP, industrial production numbers and the trade balance deficit were released earlier. Q3 growth of +15.5% came in slightly lower than expected, and shows most likely that the tiered lockdown system which started in September caused a slight slowdown in growth.

The euro is lower against the dollar this morning. The ECB virtual conference continues today, with Christine Lagarde speaking as well as Governor Bailey and Fed Chair Powell. Industrial production numbers for the Eurozone are released today and will show the extent of how partial lockdowns in major EU countries has affected growth.

The dollar is trading higher against a set of major currencies, however is lower against the Japanese Yen. Initial jobless claims are expected to come in at 751,000, however it is worth noting that the US has been outperforming this measure recently and has handled the recovery relatively better than Europe. 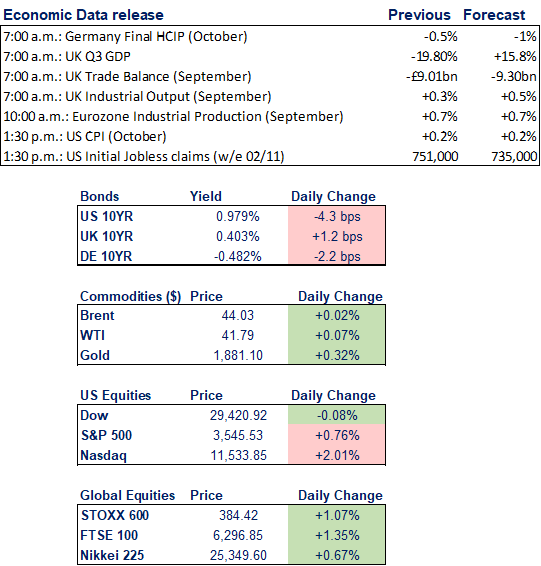